Running one fashion label wasn’t enough wasn’t for Louise Markey who announced the opening of sister brand Meadows this month, ten years after launching LF Markey. The flowing dresses of the Meadows bohemian angels introduce a stark contrast to LF Markey, known for its block colour utility pieces and well-cut trousers. We speak to the Australian native about finding her home in the London fashion scene, the obstacles with going organic and the art of balancing two brands.

Has your Australian upbringing influenced your work? Did you always want to work in fashion?
No, I started out in architecture and then moved into fashion. In the late 90s, there wasn’t much of a fashion scene in Australia so I moved to London to work at Burberry. It’s a lot more experimental here. Saying that, Australia has definitely influenced LF Markey with its bright colours – it’s a strong summer season look. I’m still getting my head around winter!

How has the industry changed from when you started? Especially the approach to physical stores?
Obviously, e-commerce has had a huge impact, meaning it’s a lot easier for designers to launch ideas, such as I have with Meadows. However, I always planned to open a physical shop alongside the website. It’s much easier to show what a brand is about with bricks-and-mortar. A pop-up isn’t for revenue anymore but it’s about branding and marketing. A shop needs to look perfect, everything has to be considered, from logistics to stock. It has to be flawless to survive.

How do the markets differ between London, Paris and Australia?
Australia is more conservative, especially in Sydney. Even though Melbourne is more adventurous the market is still really reluctant to welcome streetwear. People are more willing to accept new things in London and you really notice the wealth here. Parisians just do their own thing and they don’t care!

In a nutshell, how is Meadows different to LF Markey? What were the inspirations?
Meadows is a lot more feminine and fashion forward. The biggest inspiration was vintage. What I had in mind for Meadows didn’t fit into the LF Markey look but I wanted to wear dresses like that myself. I shelved the idea for a few seasons because I couldn't see a place for it then I decided to just launch the brand on the side. Meadows tends to be more palatable for a wider range of people but there is some crossover with customers; you can wear the brands together (LF Markey trousers look great with a Meadows top).

What were the key considerations for your Meadows pop-up? How does the design differ from your permanent LF Markey store?
From testing various pop-ups with LF Markey, we realised that you can gain a lot of traction on a bus route, so the location was key. As for the design, LF Markey is really bright and very ‘pop,’ whereas Meadows is more muted and natural, incorporating wood and twine into the interior.

How has the Meadows pop-up affected sales and brand awareness?
We used the pop-up to launch the brand and we’ve already generated a huge amount of attention. Much more than when we launched LF Markey, which didn’t coincide with a pop-up. We’ve seen a vast difference.

Can you tell me about the main obstacles you’ve faced by committing to slow fashion and ethical manufacturing? If a designer wanted to go down the same route, what would be your advice?
Finding factories and pricing are the biggest challenges. We were originally working with a company in Vietnam, then we moved to China where we have a team member keeping tabs on what’s happening, which is vital. We use natural fibres but we’re slowly moving over to organics. If you’re going down that route, keep your organic promise first and centre. That might mean using the same fabric across everything, so factor that into the design manifesto. You have to work with what you can get. It can be very limiting but that’s not to say you can’t produce great stuff.

What’s been your biggest achievement to date? What’s next?

The LF Markey flagship store opening in Dalston this year was huge. It’s also exciting to see Meadows pulling its own customer base and knowing some of our wholesale retailers are now buying both. In the future, we’re launching more pop-ups, including an LF Markey store for New York Fashion Week. We already have an established fanbase in the city. As for Meadows, we’re looking into different London locations; it’s important to test the new brand here first and see how we go from there. I live in Stoke Newington, so I’m really keeping it close to home! 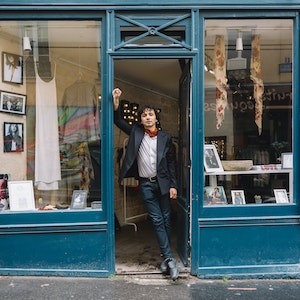 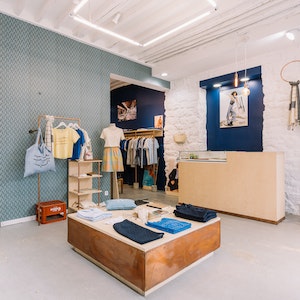